Posted by Justin Dickinson on November 11, 2007 in Art, Design The "Millennials” Are Coming

Posted by Justin Dickinson on in Culture, TV, Web Videos

My boy Ryan Healy was on 60 Minutes tonight. First off, congratulations. Second, what’s with the expose being alarmingly snarky and negative toward our generation? I blame jealousy and a nostalgic “when I was your age” sense that Gen X and the boomers seem to have toward us. “Oh no, they want praise, they’re confident in themselves, they won’t devout countless hours to a company”. Exactly we won’t. Way to alienate your young viewers 60 minutes.

Any press is good press though, especially for Ryan and his site, Employee Evolution. Congrats to him on sticking up for a generation.

Watch as “Morley Safer reports on the new generation of “millennials.” They are in their late teens to early twenties and could be ill prepared for a demanding workplace.”

Posted by Justin Dickinson on in Technology

I just installed Flock 1.0 and I’m writing this from the browser. Let’s see how it works.

Posted by Justin Dickinson on November 10, 2007 in Food, Personal, Restaurants 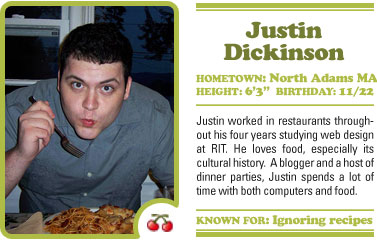 Bernstein is Cuddy, Finkel is Einhorn, Einhorn is Finkel

Posted by Justin Dickinson on November 8, 2007 in TV

Einhorn is a man! Lisa Edelstein, on the other hand, isn’t. Well, I don’t have first-hand knowledge of that but all evidence I’ve seen suggests that it is true.

The true gender of Edelstein is not the point of this. The point is that Lisa Edelstein—who plays Dr. Lisa Cuddy on House—has always looked familiar to me. I could never put my finger on it. Every scene she’s in gives me that feeling like when you have a song lyric stuck in your head. It left me quite vexed.

Recently I tossed in an old Sports Night DVD to listen to, idly, while I caught up on emails and did some work. It was the episode called “Eli’s Coming”—one of my favorites—which centers around a bad day at work for co-anchor Dan Rydell (Josh Charles). One aspect of that bad day is that a new girl will be sitting at his side for the night’s broadcast, an alleged former paramour named Bobbi Bernstein who is played by none other than Lisa Edelstein.

That was the forehead slapping (more specifically, desk slapping) moment where it all clicked. I used to watch this show religiously in college so this episode, along with one or two others featuring the Bobbi Bernstein character, explain why Edelstein looks so familiar to me on House.

Edelstein has appeared in a couple other shows that I hear some people like to watch.